In modern society, many people struggle with body image issues. A small group of powerful figures in the fashion industry set the beauty standard. And everybody else has to live up to that.

However, no matter how much effort they put in, most people find themselves unable to reach the “ideal” status. Nonetheless, people are discriminated against for deviating from the imposed standard. The recent controversies over a fashion pioneer’s body image exemplify the widening divisions over beauty and cultural identity among the Chinese public.

Yang Tianzhen is a famous celebrity agent and entrepreneur in China. She is best known as the public relations director for Chinese actress Fan Bingbing starting in 2008.

Yang started her own celebrity management company Easy Entertainment in 2016. Her company cooperated with various top celebrities, including two former members of the K-pop group EXO, Lu Han and Lay Zhang. Under Yang’s watch, both members’ careers took off. Yang and some of the celebrities she cooperated with

For many years, plus-sized girls in China have struggled to find chic yet size-proper clothes due to the lack of plus-size womenswear brands. But the population of “overweight” people takes up over 35 percent of the total population of China.

Thus, plus-size clothing has become the next hotspot for the entire textile industry. 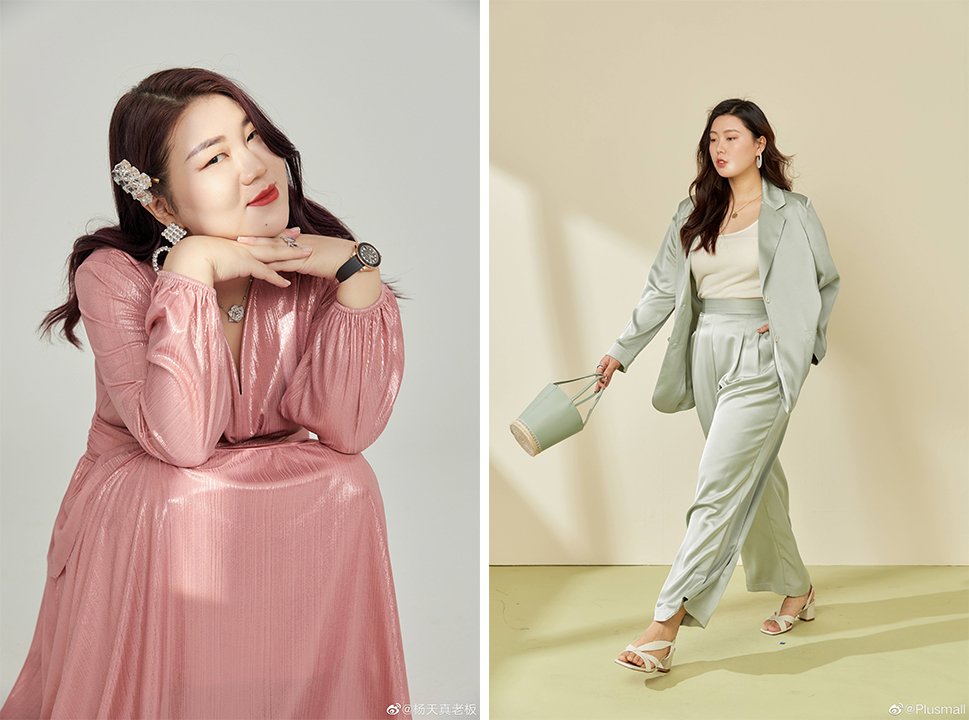 Yang’s image as a plus-size woman who still enjoys huge success has made her the best spokesperson for the “plus-size campaign” in China. However, this kind of visibility garnered deep controversies.

On March 20, Yang posted pictures of her in swimsuits on Little Redbook, a popular social media platform. Within a few hours, the hashtag #Yang Tianzhen in Swimsuits became the number one trending topic on Weibo, the Chinese equivalence of Twitter.

Yang displayed her body in a way that was uncommon in the more reserved Chinese culture. And the public opinion on her initiative is highly divided. Yang showed herself in swimsuits on social media

Advocators of women’s rights championed Yang’s courage and determination. Many influencers in the entertainment and fashion industry voiced support.

For example, the fashion account “lookFashion”  commented that “body size can not define girls’ charisma, beat the eternal hostility with your soul, you are the queen!”

Many cultural conservatives criticized Yang’s action. In the comments section of the original Little Redbook post, furious netizens labeled Yang as narcissistic and morally degraded. Some even cursed Yang and attacked her career, even though it is irrelevant to her body image.

There were also people with a neutral perspective on the incident. They complimented Yang for her bravery, confidence, and vocal support for diversity. Meanwhile, they raised warnings of the health risks of obesity. In fact, Yang herself suffers from diabetes.

War on Cultural Identity in China

The controversies around Yang’s body image also reveal a broader picture of the “war” on cultural identity among the Chinese public.

On the one hand, progressives advocate for equality, diversity, and inclusiveness. Feminists and pro-LGBTQ rights activists are the most vocal in this regard.

On the other hand, cultural conservatives oppose the legitimacy of most progressive discourses. They label similar views as either a disregard for social rules or foreign interference. Critics of body shaming fall in this category. For many Chinese audiences, Jones’s representation in the mainstream space manifests the increasing public support for diverse beauty standards. But for others, it was proof of overly asserted political correctness and the “declining West.”

Yang and Jone’s cases illustrate that regardless of nationality and social status, women are suppressed by body perfectionism. In societies such as China and Greater East Asia where “being skinny is the feminine ideal,” women inevitably face more intense judgment.

I support both Yang and Jones’s visibility in the public. Meanwhile, I’m aware of those who might hold different views from me in contemporary Chinese society.

After all, it will be an ongoing war on the future direction of China.

What are some of your thoughts on the latest controversies surrounding Yang Tianzhen? Tell us in the comment section below!