Why Has Chinese Street Fashion Become So Popular?

Over the last couple of weeks, people on TikTok have been obsessed with Chinese street style. However, why specifically has Chinese street fashion become so popular?

Watching the videos on TikTok, you might notice that none of the styles are particularly new. Nor do the outfits fall into one cohesive category. But regardless, people have been entranced by these slow-motion videos of stylish people walking down the street to Chinese pop songs.

It seems like the Chinese street style doesn’t adhere to one specific type. It takes from Japanese Lolita, punk, and even New York street style. This flexibility is what makes it so attractive to such a broad audience. Additionally, these everyday fashion icons aren’t just taking inspiration from other trends. They make it their own by incorporating pieces that are unique to their culture, such as traditional Chinese clothing. That is not the only thing that makes it special: Chinese street style also mixes pieces from different styles to create a stunning statement outfit. Pastel goth is an aesthetic that is derived from, well, goth.

Goth is a subculture and a fashion style that developed in the United Kingdom during the 1980s. It was inspired by the music genre gothic rock. Goth fashion was also inspired by Victorian fashion, except with dark attire and smokey makeup. Goths also take inspiration from styles shown in gothic literature and gothic horror films.

Pastel goth is rooted in Japanese Harajuku street style and lolita fashion. It was popular in the 2010s. Pastel goth is essentially someone saying, “Let’s take goth style and make the color scheme pastel, add more cute factor, but still keep the horror elements.” We also describe it as “creepy cute.”

Chinese street style brings it back to the forefront, 10 years after its peak popularity. It also incorporates new elements like qipao. Another classic look that has integrated into Chinese street style is hip-hop fashion. Hip-hop is a movement created in the 70s by the African-American community in the Bronx, New York. While it is a highly innovative music genre, hip-hop also influenced the fashion industry.  Fashion became a method of expression for the artists. The hip-hop community made its own rules, rather than follow  mainstream fashion trends in the music industry. The looks include wearing oversized clothes, bucket hats, chain accessories, denim dungarees, sportswear as casual wear, and sneakers. Artists also pioneered mixing high-end designer clothes with casual pieces. The style of wearing a tight fitted top with baggy pants came from 90s hip-hop and R&B. Nowadays, trends inspired by hip-hop have evolved to be more wearable in everyday life. But what makes these TikTokers so outstanding is their unwillingness to simplify their outfits. I could see any one of these outfits in an Aaliyah music video. E-boys and e-girls—or as I like to call them, “e-people” (my apologies for the bad joke)—is the latest fashion trend for teenagers on social media. The style is one of the broadest genres of clothing. It is considered a combination of long-standing parts of internet culture, such as anime, K-pop, and skater culture. Outfits often consist of layered skirts, sweaters, and jackets along with baggy pants and chunky boots like Doc Martens. Chains and metalwork are the accessories. And feminine outfits take inspiration from anime and consist of school-girl skirts (or skater skirts), thigh-high knee socks, and Mary Jane school girl shoes. 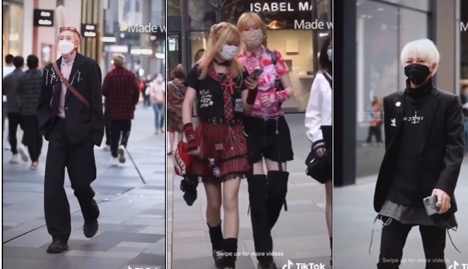 The makeup of "e-people" aims to make the wearer look younger through exaggerated blush on their cheeks and nose. This look also involves dyeing hair with eccentric colors, most likely inspired by anime characters. The e-girl/boy look aims to look edgy and alternative but in a cutesy way.

However, full e-girls/boys tend to be more of a persona on the internet. Rarely will you see a person on the street in full e-girl/boy regalia. But these Chinese street fashionistas bring some of the most outstanding parts of this look to real life, which is what makes them so eye-catching.

This portion of Chinese street style is the most unique to China and not necessarily inspired by outside influences. In 2019 wearing traditional Hanfu clothing came back in fashion. The younger generation decided to show their appreciation for Hanfu fashion and culture by wearing full traditional garbs in everyday life. Hanfu are stunning outfits. But people truly get creative when traditional Chinese pieces and silhouettes are incorporated into modern styles. For example, the two photos above show dresses that use traditional Hanfu silhouettes, but with a modern twist. The dresses don’t have nearly as many layers. They include applique patterns and mesh fabric to show some skin—something traditional Hanfu clothing would never include.

These outfits have a more subtle inclusion of traditional Chinese clothing. The person in black on the left took inspiration from the layered dress of Hanfu. But they made it more subtle by wearing all-black instead of the traditionally bright colors.

Chinese street fashion is fascinating to a global audience because it doesn’t adhere to one specific style. It also doesn’t reduce its creativity to be “normal looking.” Those stylish people embrace that fashion that sticks out from the crowd. They don’t shy away from experimenting with elements from different genres and combining them to create something unique. In Chinese street fashion, there is a little something for everyone.