What’s The Deal With That Famous Chinese Panda Meme?

by Brittany Merrick 2 years ago1 year ago
2

Who hasn’t seen the iconic panda-face meme? There are many variations, but they always follow the same format. The meme feattures a drawing of a panda with the face of a man; the man is always expressing a specific emotion. It’s accompanied with text, often Chinese, but now there are versions in almost every language. It’s been around for more than a decade.

So what does it mean?

The panda meme belongs to a wider category of Chinese memes. They're known as ‘表情’ (biao qing), which translates to ‘facial expression’.  You could consider them to be something like a Chinese version of rage comics (remember those?).  These ‘biao qing’ cover a wide variety of memes, from simple emoticons all the way to reaction GIFs.

As an example, take a conversation you might have with a friend. She asks you how a test went, and instead of replying with words, you send a GIF of a crying baby. Biao qing function the same way. They’re used to express an emotion, feeling, or reaction in a way that can be far more effective than using words. The panda meme is a particularly popular version of biao qing, due to how easy it is to customize. That is, if one of the thousands of versions already online doesn’t fit the job.

The facial expressions seen in the panda meme (and others) are often faces taken from viral media in China. The most iconic panda face is that of Choi Sung-kook, taken from a screenshot of a scene in his movie Three Kims. Almost all the panda memes have similar corresponding real-life faces behind them. 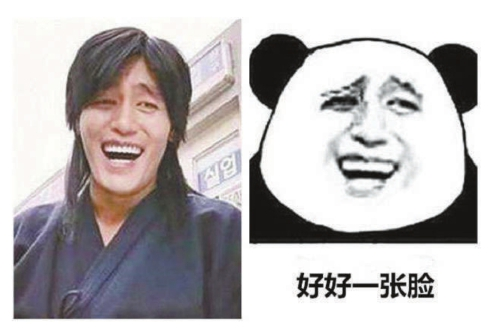 These reaction memes are explosively popular in China. So how did they start?

It turns out, this unique style of meme was created by a man named Wang Nima. He was a fan of Western rage comics, and realized there was no Chinese equal. So in 2008 he founded the website baozou.com to put out his own rage-comic-inspired creations. Their popularity exploded, and has never gone away. Despite the panda meme going viral all around the world, biao qing is still relatively local to China. Next time you’re looking for that perfect reaction image, try copying ‘表情包’ into your browser. See what China’s unique and hilarious meme culture has to offer! You'll find many in English, and many without text.

Some are in Chinese, but what's a better reason to start learning a language than to understand memes?