Will China Continue as the Dominant Global Polluter?

by Hannah Keenan 1 year ago11 months ago China continues to taint its reputation in the global arena, whether that be due to Covid-19, trade wars, and human rights abuses. One of China’s most pervasive abuses is towards the environment.

Across the entire globe, China accounts for 50% of coal burned and 25% of climate pollution per year. With a population of 1.4 billion people and counting, a bright future seems dismal.

As more Chinese citizens move from the rural into the urban populations, how will China tackle its environmental crisis? Today, it stands as the dominant global polluter.

According to the Climate Action Tracker organization, China aims to peak its CO2 emissions by 2030. The organization deems this goal as “highly insufficient.” Their weak 2030 commitment includes reaching a maximum of 10% gas and 20% non-fossil fuels in the primary energy mix. Under the Paris Agreement, members must keep warming limits to 1.5ºC.

China deviates from this agreed upon standard by allowing warming to potentially reach between 3 and 4ºC. China’s strategy is extremely unfair to other countries genuinely concerned about excessive warming. 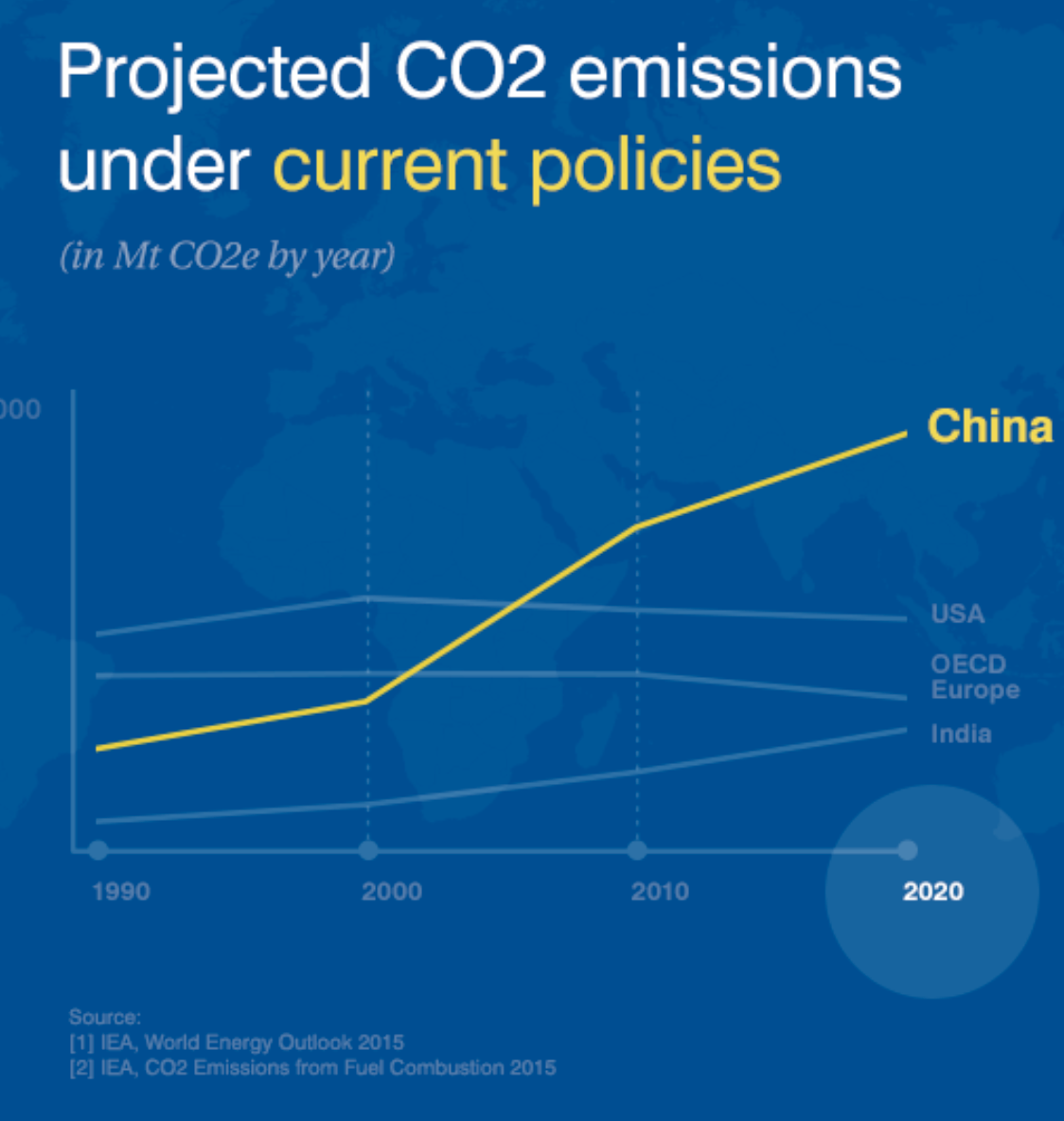 China depends on cheap labor and lax environmental regulations to sustain itself as an industrial powerhouse. Experts predict that China’s carbon market post-2020 will grow to cover over 7,000 companies.

These companies will also rely on the predicted 250 million more people moving into urban areas in the upcoming 15 years. Compared to the countryside, people residing in cities use twice as much energy.

A rapidly growing population, especially in urban areas, is inevitable. Therefore, how can China rapidly diminish their greenhouse gas emissions?

Unfortunately, any well-designed plan takes many years to prove effective.

Lauren Myllyvirta, who is the Centre for Research on Energy and Clean Air’s lead analyst, argues, “The key for the coming five years is to lay down the groundwork by getting coal-dependent provinces and state-owned enterprises to diversify their economies and business and to stop investments in new fossil capacity.”

Li Shuo from Greenpeace East Asia views China’s position optimistically, stating, “Based on our analysis, China will be able to peak emissions by 2025.”

As little as a 5 year difference from the initial projection of 2030 will make massive improvements. Only time will tell China’s progress to minimize their carbon footprint.

Aside from the divisive trade war, the United States and China both deviated from climate change control in the past few years.

If any progress is to be made, President Biden and President Xi Jinping must cooperate in sustainable sectors such as energy and green finance. Both nations are the largest global CO2 emitters, with the US accounting for 15% and China accounting for 28%.

During discussions on China-US cooperation in April of 2021, the Vice President of Renmin University in Beijing asked a poignant question: “The relationship between China and the US is at a critical juncture. Will it be possible to start a new development path in the post-Trump era for the Biden administration?”

Cooperation may actually come into fruition considering that President Xi Jinping will attend the virtual Earth Day Summit hosted by the Biden administration. Climate change is a complex and multifaceted challenge that every country must fight. China remains the dominant global polluter. Without China’s accountability and action, the Earth will slowly disintegrate.

One effective strategy does not exist, therefore, the private and public sectors and Chinese communities must pursue immediate action. China will no longer stand as an industrial powerhouse if climate change dominates the global economy.