The History of the Chinese Dragon Dance

by Abigail Heng 1 year ago1 year ago

Chinese dragons are a powerful and benevolent symbol in Chinese culture. Dragons symbolize positive characteristics like luck and goodness.

In ancient China, agriculture production was dependent on rainfall. To pray for good fortune, people would offer sacrifices to the dragon in the spring.

Some people believed dragons could protect their lands and harvest from flood damage.

Over time, dragon worship developed into the dragon dance. Nowadays we can see Chinese dragon dances at various celebrations.

Generally there is a long dragon dance costume made of materials like grass, bamboo, paper and cloth. Odd numbers of the dragon’s joints are auspicious.

As a result, people often make 9-jointed, 11- jointed or even 29-jointed dragons. The dragon body is woven in a round shape of thin bamboo strips, segment by segment, and covered with a huge red cloth.

During the dance, performers hold poles that help them raise and lower the dragon. The lead dancers lift, dip, thrust and sweep the dragon’s head.

All of the dancers within the dragon must cooperate to move the dragon’s body in synchronization with the timing of the drum.

Sometimes the dragon chases a ball on a stick. This is called the “Pearl of Wisdom.” The dragon is chasing this “pearl of wisdom” to pursue insight and knowledge.

This style originated north of the Yangtze River. The body and head of a northern dragon are smaller than its southern counterpart.

This dragon is often made of paper or plant fibers, which make it lighter.

Northern dragons are normally made with fluorescent materials, which allow performances to be held in darker environments. The northern dragon emphasizes flexibility.

This helps the dancers direct the shape of the body and the way it flows with the beat of the music. It also allows the dancers to maneuver the head in fast-paced motions from left to right. The southern dragon dance originates from south of the Yangtze River. The body of the dragon is more finely decorated and is heavier than northern dragons.

The southern style emphasizes momentum and strength. It doesn't have agile movements, but it has a grand appearance.

Since the southern dragon dance doesn't focus on flexible movements, the dragon can be anywhere from 20 to 100 meters long.

The southern dragon’s skeleton is often made of bamboo and paper. The body's skin is made with cloth with drawn dragon scales.

Common moves of a southern dragon dance are circling, making 'S' shapes and lifting the head above the body. 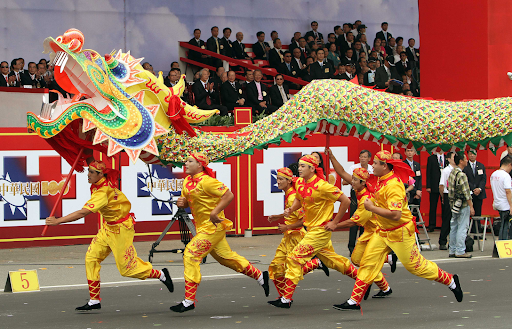 Dragon dances have long been part of Chinese celebrations. They are a symbol of good luck, one of the essential symbols in Chinese culture.

The Chinese dragon dance celebrates the old year’s ending and welcomes the new year with good luck and blessings for the Chinese people.

Today this traditional dance is performed all over the world wherever Chinese immigrants have settled. This is a spectacular highlight for celebrations and can be enjoyed by anyone, regardless of origin.